Bob Greene, a Director/Consultant,  Silicon Valley Thorium Alliance said, “We displayed one of Michael Killen’s Don Quixote paintings, in our booth,  to attract the 24,000 academics and scientists attending the American Geophysical Union Fall 2014 event, in the Moscone Center, San Francisco. It worked.”

Alex Cannara, another Director/Consultant  added, “We were very busy  sharing that  the new generation of nuclear reactors burns nuclear waste and if  you build them in the right places, they are as safe possible. 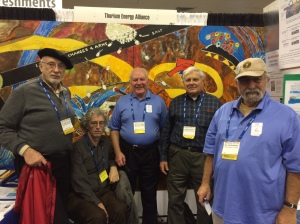 Artist, Michael Killen, acknowledged that it was Alex’s and Bob’s consulting that helped me realized that Ocean Change may hit us harder and sooner than Climate Change, and that the world may need a power source of clean and safe energy sooner than later. It lead me to make “Don Quixote Meets Ocean Change’ (15 x 6 feet) not shown in the photo.”

Provided message-art to the US Dept. Commerce, Dept. Interior, NASA, Gov. CA. Microsoft, Stanford University and other organizations to help them share their climate, energy and sustainability messages, published 100 market research reports, and assisted 700 leaders worldwide share their messages on social media and TV. Michael is the author of five published books, and also the artist who created the Inflation Reduction Series of paintings.
View all posts by Helps Marketing & Sales Exes Seize Opportunities Created by Energy, Climate & Sustainability Provisions of the Inflation Reduction Act →
This entry was posted in Uncategorized. Bookmark the permalink.